disclaimer: this is based on our experience, expertise, and public sources

Some Background Link to heading

Why should you listen to us? Link to heading

Guy spent a great deal of time balancing the needs of the product with the security needs of protecting those secrets and is acutely aware of the various pressures involved.

A password manager is a place to store your passwords more securely than using a post-it on your computer screen. Password managers became prominent when security people educated the public about password reuse.

Password reuse was a big issue a couple of years ago, as a breach in a single service would allow attackers to use the same password from that breach on other sites, hoping that the user “reused” his password. As the need for more passwords and remembering them became greater, systems to manage many passwords were needed - and thus, password managers were born.

Keeping all these passwords synced between devices, secure, and providing a simple user interface (UI) to use - is a delicate balancing act and a place where we often find failures.

What do we want from a password manager? Link to heading

Any password manager should be able to provide the following basic features:

While for security people, the security of the product and keeping their passwords and secrets are the most important aspect, for most users, providing a friendly, usable UI is often more critical.

It is possible to balance the two, but we also think that LastPass made some bad product decisions down the line, which are the main problems behind its current issues.

How to store passwords securely? Link to heading

To store your passwords securely on your devices or in the cloud, you want to ensure that only the owner can access the passwords. That means we must encrypt them with a key known only to the owner.

Ideally, we would want each service or website we use to have its unique secrets, with a single password known only to the owner to access them all.

So the question now is how do we protect the user’s secret key, or as it is commonly referred to, the master password?

Unfortunately, these assumptions don’t always hold in the real world. For example, the best possible password would be a sufficiently long (12 characters minimum) randomly selected password. But most people use words or phrases that they find easy to remember, which creates a significantly weaker password.

So, What happened at LastPass? Link to heading

LastPass disclosed that they had a breach on August 2022 of their cloud storage. That storage held backups of the customers’ encrypted vaults.

They also claimed that customers were safe if they kept to the default settings (which they provided):

They also claimed that customers were safe as LastPass employs a “zero knowledge” architecture.

So - this means the attackers have nothing. Furthermore, the customer’s vaults were encrypted with the master password, so all should be OK.

Password Key Derivation Function (PKDF) is an algorithm that allows us to take an input and compute an output so that having a production will not let you derive or guess the information.

For example, if you want to compare the user’s master password with the master password on the backend or service side, it would be best if the back had “Zero-knowledge” of the actual password. This is because when using a PKDF, the backend stores the result of the computation and is unaware of the existing password.

You would also want this function to be computationally expensive. For example, if you use some easy algorithm to compute, an attack can calculate all results for common passwords and get the master password that way. Pre-computing these results and preparing them for use is often referred to as a hash table.

Users with accounts before 2018 still use 5,000 iterations

Key derivation using PBKDF2-SHA256 with 100,100 iterations is slow (as intended). On a Macbook Pro laptop with Python, we reached ~10 derivations per second. Of course, this is far from being optimized (CPU vs. an array of GPUs, Python vs. ASM, crypto code optimizations, etc.). Still, even if we increase in multiple orders of magnitude (~0.1m/1m/10m), it will still be slow enough never to be able to brute force the 12 chars master password. 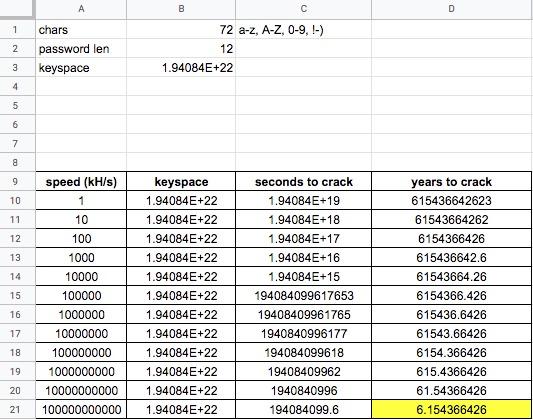 Everything is protected! Link to heading

Well, except metadata such as URLs and other information. Unfortunately, this means attackers with a user’s vault have access to the list of services you’re using - which could be better.

Consider the following scenario. A phishing email crafted by an attacker goes something like this:

We wanted to see exactly what data is encrypted and what’s not, so we opened a new LastPass account and filled it with fake accounts. Then, we got the vault (stored locally and transferred via getaccts.php). Then, we parsed it using lastpass-vault-parser and saw which specific fields were kept - encrypted and unencrypted.

We discovered that the following fields are encrypted using an AES-256-CBC key derived from PBKDF2 with 100,100 iterations of the Master Password (each encrypted field has the structure of !base64(IV)|base64(AES-256-CBC):

It’s important to notice that bank accounts and credit cards are treated as Notes and, therefore, encrypted.

So, while these vaults held protected (or encrypted) secrets, they also had additional data that LastPass decided not to encrypt. That additional information includes, among other things, the website URL of the service the password belongs to.

This isn’t very good in a couple of different ways:

In the LastPass announcement, they claimed that it would take millions of years to crack the master passwords, which sounds reassuring. However, there are a couple of issues with that claim. First, this vast number of years is based on users picking a random password of sufficient length. However, the reality is often different, and attackers are not that stupid.

When asked to pick a strong password, most people would pick some phrases or words and add some letter substitution. For example, replace i' with 1` (which is sometimes called leet-speak).

Considering a truly random 12-character password will give us a space of about 2^72 different passwords. But as people are not computers, they tend to pick weak passwords:

So what does this mean? Cracking a 2^35 strength password costs about $100. if you have a shorter password or pick a simple one, it would cost less and take a shorter amount of time (this assumes 100,000 iterations for the PKDF).

12 character minimum was introduced in 2018, which is excellent. However, users with accounts created before that date were not asked to upgrade their password and can still use a lower limit (e.g., eight characters) as their password.

LastPass omits a pepper in their PDKF scheme. Pepper is a secret known only to the backend, used to augment the strength of the user-supplied password. The assumption is that users might have weak passwords, and including this “pepper” will allow them to strengthen their password security at a low cost.

So, What went wrong? Link to heading

LastPass made some product decisions along the (we assume), which led them to the current situation. As they did not want to migrate users to a more robust scheme (and thus make their security stronger), they decided to keep their settings as they were, even though they were aware of their weaknesses.

Some of the information they stored in the vault needed to be encrypted, probably to assist the product’s usability, for example when loading web pages and checking if the lastpass browser adds-on needs to kick in. Of course, they could have gone a different, more secure route, but we are guessing the product decision was made to keep things more straightforward and, thus, less secure.

Finally, it needs to be clarified how attackers could access and exfiltrate the user’s vaults - and why this was not detected for so long.

What can you do? Link to heading

Using a password manager is still a better alternative than not using one. Of course, there are many tradeoffs about usability and accessibility for your password manager, but it would still make you more secure to have unique passwords per service.

You should make use of MFA whenever any service offers it. This will allow you to protect your accounts even if the service passwords are exposed. Use MFA on a separate device (such as a mobile phone or YubiKey) for your critical accounts.

And finally, you really must choose a strong master password.

The best thing you can do is use a randomly generated password of sufficient length. They are very strong but harder to remember. cat /dev/urandom | head -c 16 | base64

Another alternative is to take the XKCD approach, use 5-7 randomly selected words, and remember them. This is easier and still provides a secure option.

Finally, if you have a bi-lingual keyboard, you can cheat. Choose some phrase in your language, but type it using the English keyboard. This will create a seemingly random string of characters with sufficient length to be secure.